Come see how to get your hobby on and keep it icy on the tabletop with  The 3 Golden Rules For ‘Counts As’ Conversions from our local conversion boffin Adam.

I’ve been heavily converting 40k armies for over 10 years and have had a mixture of successes as well as a few failures. Converting is a great way to not only make your army unique but also make building it feel less monotonous as each model can be converted differently, I never grew tired of creating my Rebel Grot army which has grown to a large collection since they were first unleashed at the Gobstyks’ 10th Birthday evening. 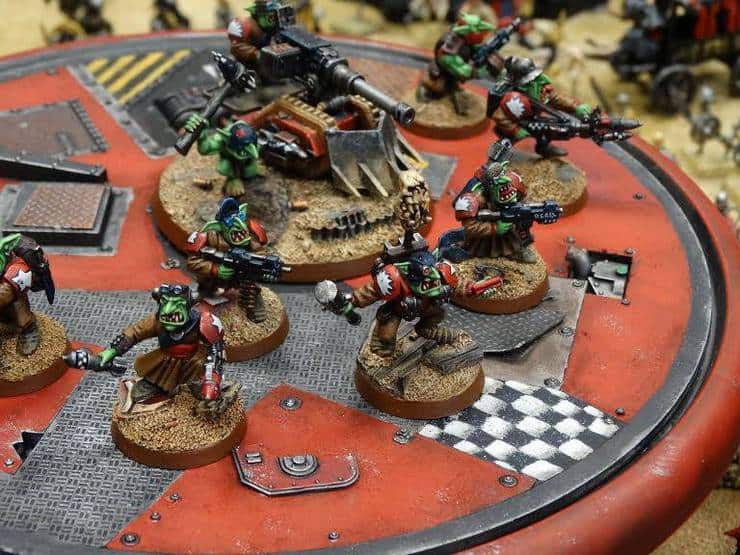 So I’m here today to explain the 3 golden rules I’ve learnt to follow over the years to help those who are interesting in converting their own ‘counts as’ model or army.

RULE 1 AVOID ANY CONFUSION
Let’s start off with the most important rule and that is to try your best to make it easy for opponents to recognize what your models represents. Ideally you want players to be able to guess nearly every unit correctly after you tell them what codex your using.
Too often someone will convert too much or too little and a great idea will be ruined by it being frustrating to play against. For example I once saw an amazing Kroot Mercenary army at a GW tournament, however when I found out they were using the Tyranid codex I struggled to determine what most of the miniatures represented as he done little to no conversion work to the original GW & FW models. Because of this his opponents complained and I believe he was told he couldn’t use his army on the 2nd day.
I on the other hand did too much, and got carried away with an all robot themed army below, can you guess the codex or any of the units? 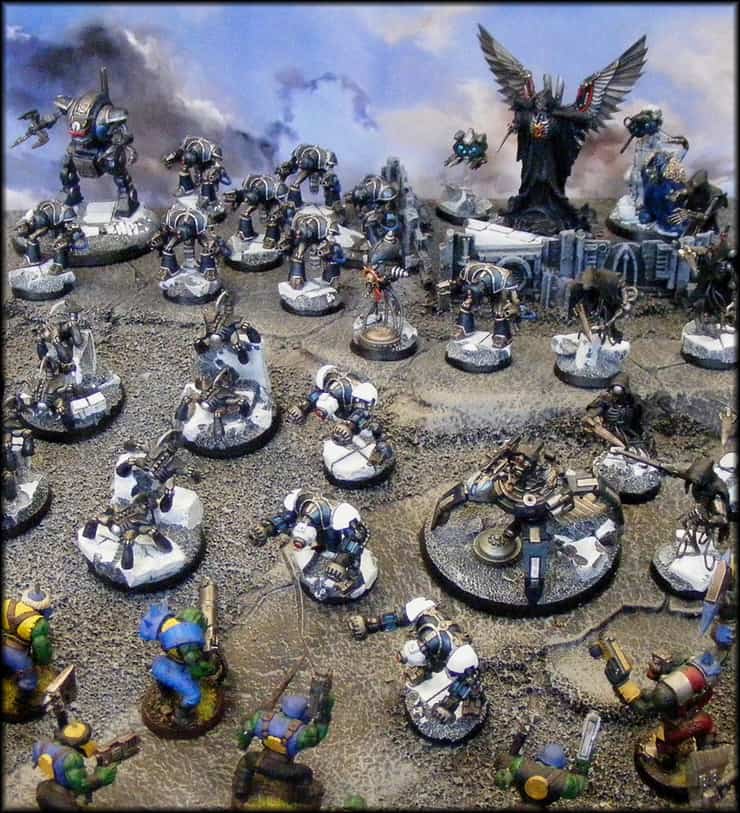 Necrons? No, they were one of the most boring and weakest armies at the time so I foolishly choose Tzeentch Daemons instead. This resulted in an army with so many different units it was a confusing mess that required my opponent to have a reference sheet. Needless to say this army was impractical for gaming and it wasn’t long before it was sold off to a collector.

In order to avoid this problem it’s important to have very similar characteristics to the original miniature, this way not only does the model look like it would have the same stats but it helps players better connect it to what it represents.

A good example for this would be my recent Broadside conversion for my Tau Drone army, even thou it looks nothing like the original model it can still be recognized as a Broadside. This is because of it’s bulky appearance, the fact it’s ground based and of course the signature weapons. 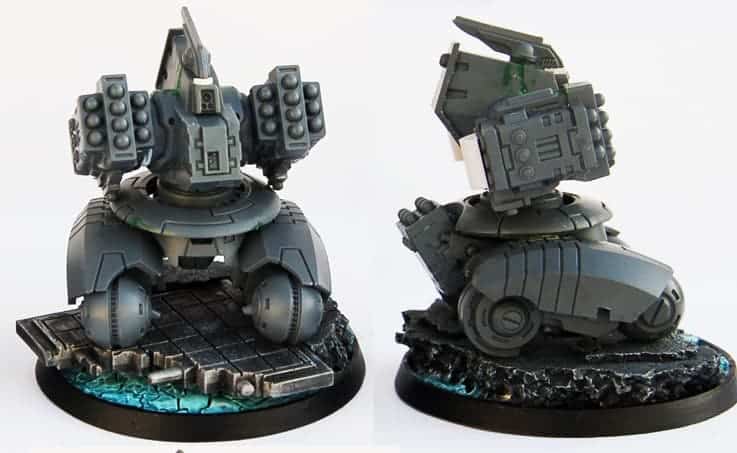 This also heavily applies to wargear as it’s vital that it be clear to your opponent what your models are armed with.
When doing the wargear for my Pre-Heresy Thousand Sons themed Grey Knights the nemesis weapons were easy however the storm bolters were a challenge. Standard Storm Bolters wouldn’t look right on the power armored warriors and I didn’t want to use the arm mounted ones either. So I used the forgeworld bolters with the large ammo clips and scout binoculars to create a doubled barreled boltgun that looked like it had a high rate of fire to represent them.

This applies to vehicles as well, I’ve seen several Imperial Guard players who have used a different hull for their tanks. Like before any changes are fine as long as it’s not to drastic, such as my own Leman Russ conversion below. 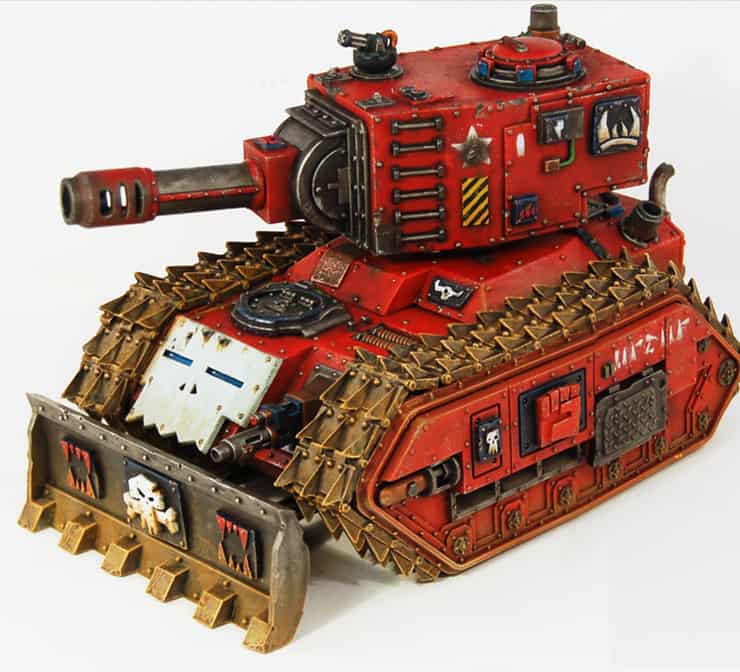 When in doubt keep it simple!
An easy way to go about fully converting a ‘counts as’ army is to keep the list simple, a player is unlikely to get confused if you only have 2-3 units to memorise providing they look the part.

But remember when you have an idea for an army always choose a codex that is most suitable to the look and feel of your army.

Say you want to create a Mechwarrior/Titanfall themed army, you could field an all Dreadnought list using the space wolves supplement. Just make sure your Mechs are a similar size to the original models and their weapons are recognisable. You could potentially convert a few different variants to represent different Dreadnought types providing they all were distinct from each other, you could even have Bjorn as a command mech with a different paint scheme and banner to differ him from the others.

One of my oldest projects which was an Undead Chaos army is a great example of this simple ‘counts as’ style. It consisted of only two types of infantry unit; Ghost marines for Thousand Sons and Ultrazombies for Death Guard. 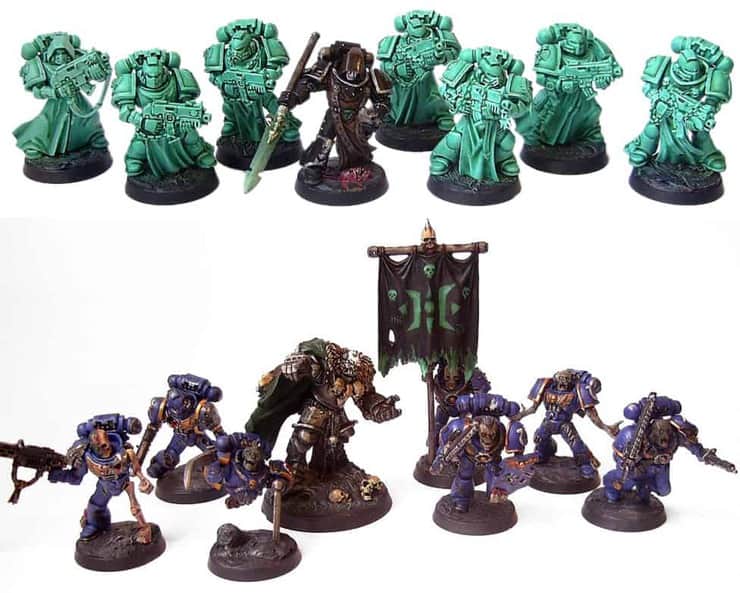 Keeping it simple like this prevents the game being slowed down as your opponent tries to remember what everything is. At the end of the day you don’t want your army to complicate games but turn heads and be pleasing to look at and play against.

RULE 2 – KEEP THE SIZE SIMILAR TO THE ORIGINAL

One of the worst comments you can ever receive as a converter is the accusation you’ve modelled something for a strategic advantage. This is why you should always strive to match your conversion as close to the size of the original model as possible especially for vehicles, and always match the original base size of the model.

My Grot rebels are surprisingly just a few millimetres shorter than a guardsmen model, so they were all placed on scenic bases to make up for the small difference. 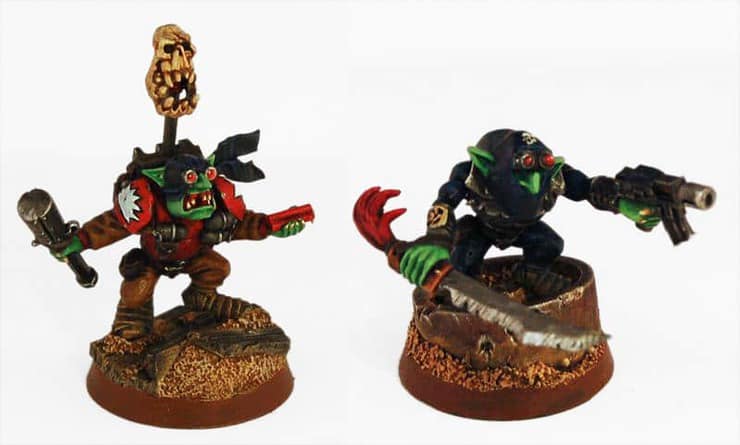 When converting each variant of my Tau Drones I made sure to match the original miniature in bulk and height as you can see below, this was made easier due to the flight stands. 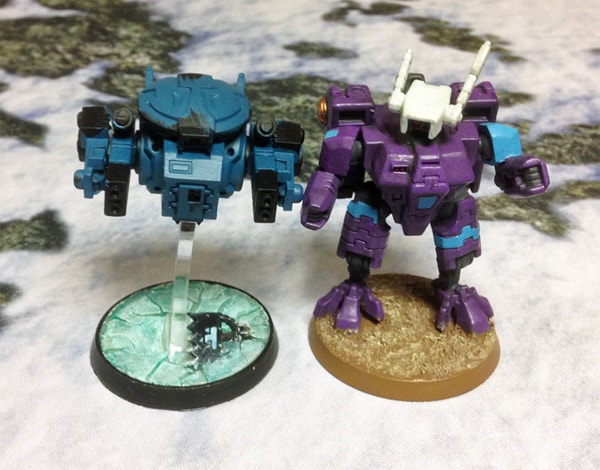 If you do convert something smaller or larger than the original model you must be prepared to be lenient if you do face such a accusation. If your opponent states they would hit the side armor if the tank hadn’t being converted wider than the original let them take the shot, after all it’s just a game.

RULE 3 FEEDBACK IS VITAL!
If you ever plan to use your conversions for gaming it is best to seek feedback and suggestions from others during the conversion process as this will greatly help with the first two rules above.
When converting models I always seek out constructive criticism on 40k forums and Facebook groups. Having your conversion judged early on can reveal potential problems you may have overlooked as well as ways to improve it.

It’s also strongly recommended that you always check with tournament organizers before taking any heavy converted armies to an event. Having the organizers approval can avoid any serious problems that may arise due to your army being converted, like the Kroot Mercenary army I mentioned that was banned on the 2nd day.

Converting an army can be an enjoyable experience, but you mustn’t let yourself get too carried away, remembering that at the end of the day you will be using it for gaming purposes.
Anyway I hope you found this article helpful and I hope to see your conversions at Gobstyks.